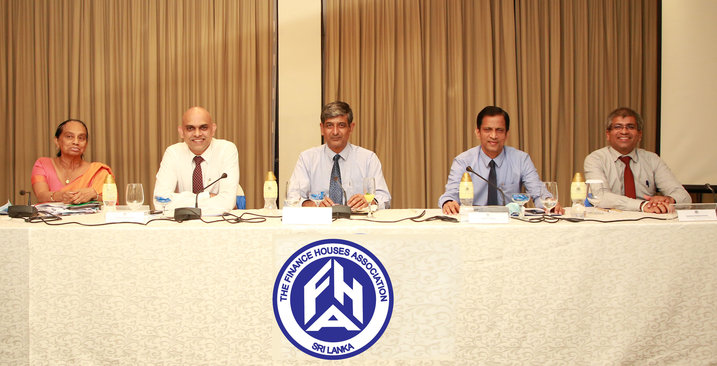 The Finance Houses Association of Sri Lanka (FHA) announced that it will continue to empower the nation with ethical finance practices while acting as the mediator to the non-banking financial industry. Since its inception in 1958, the association has played a crucial role in safeguarding the general public from corrupt practices of unregulated finance companies and contributing to the development of the non-banking finance sector of the country.

The Legal Circle, Compliance Office and the HR forum of the association provides a forum for officers to discuss common issues, and suggest the best practices to its member companies.

FHA is currently involved in representing the membership at the discussions with officials of Central Bank, other regulatory bodies, Ministries and Chambers of Commerce. Further, the association is engaged in conducting staff training programs, image-building activities to develop a more positive image of the regulated finance companies and organize social activities that consolidate the camaraderie among the Registered Finance Company (RFC) community.

The RFC Sector functions as a net lender outside the Western Province facilitating SME’s and rural financial inclusions providing much needed assistance to hundreds and thousands of rural entrepreneurs who are unable to access banks due to lack of formal documents. The non-banking financial institution (NBFI) sector has played a crucial and important role in meeting the needs of the masses of first-time borrowers who need funds but do not have the formal documentation required by the banking sector.

Expressing his thoughts FHA Chairman R.H. Abeygoonewardena said, “FHA is well positioned to embark on a successful journey with licensed finance companies ushering more prospects within the scope of NBFI sector. This industry has developed from leaps and bounds whilst contributing to country’s economy to a great extent. Not only that, it has lent its support to uplift the livelihoods of people and per capita income. In addition, NBFC’s provide a host of benefits such as funding, direct contact with clients that eliminate the intermediaries, a profitable space for investing and many more.”

The non-banking financial industry of Sri Lanka has grown rapidly and in 2013, the entire asset base of the RFC’s stood at Rs 622 billion. Within a span of six years, it escalated up to Rs 1.390 trillion. During the same period, loans and advances of the Regulated Finance Companies (RFC’s) have grown to Rs 1.066 trillion from Rs 471 billion.  This 60-year-old industry accounts for around seven million customers at present in the form of 57-60% borrowers and 40-43% depositors while it houses about 32,000 employees.

The NBFI industry is funded mainly through public deposits (50%-55%), bank borrowings (25%-30%) and shareholder’s capital infusion (8%-12%). It consists of 31 listed and 8 unlisted finance companies. While 85% of the industry is dominated by the top 16 companies, which accounts for over 20 bn assets, the balance 15% is shared by the remaining 23 companies.

The industry has identified the need to reach to the general public and expanded the branch network to more than 1350 branches. These stats showcase the extent to which the industry influences the people of Sri Lanka. In addition to its robust growth, the industry has paid attention to the betterment of the country and approximately Rs. 16 billion was paid by the industry in the last financial year in the form of direct taxes. In addition, the industry is regulated under Finance Business Act No. 07 of 2007, Finance Leasing Act No. 56 of 2000, Consumer credit Act No. 29 of 1982.

It is evident that some fraudulent acts of non-regulated finance companies have led to misconceptions about regulated finance companies and practical reforms need to be made in order to streamline the finance industry. FHA suggests to enact the proposed Moneylending and Microfinancing act to prevent lending activities unless registered under that act, create a special investigation unit to investigate and to enforce action on unauthorized institutions operating in the country, creating a healthy NBFI operating environment and introducing conducive policy standards and legal frameworks that empower people and communities while supporting the economy.

FHA acts as the apex body of 39 registered finance companies with CBSL and is the successor to Ceylon Hire purchase and Finance Association. The Association was renamed as The Finance Houses Association of Sri Lanka (FHA) in 1986. For more information visit; http://www.fhalanka.lk/