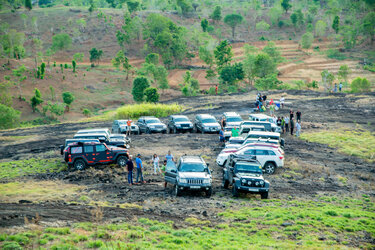 The Jeep Club of Sri Lanka (JCSL) recently concluded its 6th annual expedition, an event that aims to both engage and challenge members with a combination of scenic routes and undiscovered paths in the country.

Speaking at the event, Jeep Club of Sri Lanka President, Mr. Nalin Premaratna said, “With 19 participant members joining the three nights four days adventure, the successful event upheld the JCSL’s commitment to cultivating the exploration of the great outdoors, whilst getting to know like-minded Jeep enthusiasts better during the event”. The expedition was arranged from 1st to 4th October 2020 by the JCSL and DIMO, the only authorised distributor for Jeep in Sri Lanka.

This year’s expedition was held under the theme “Trail of Majesty”, a concept which was crafted to delve into the areas documented as part of the final battle held in Wasgamuwa national park between the Sri Lankan King Dutugemunu, and the invading South Indian King Ellalan.

The annual expedition is one of many ways in which the Jeep Club of Sri Lanka, along with DIMO, gives back to owners of the legendary 4×4 brand. Each year, owners of Jeep 4x4s are presented with challenging, fun and educational routes that allow them to fully embrace the extraordinary lifestyle that these off-road machines enable.

Speaking on the expedition, Group CEO of DIMO, Mr. Gahanath Pandithage stated, “It’s been a fascinating experience for all members of the Jeep Club of Sri Lanka. Being able to gather together our Jeep owners and their families and have them bond together while exploring new routes within the country has been very interesting, and we look forward to supporting next year’s event in a similar fashion.”

With much of Sri Lanka’s natural beauty remaining off the beaten path, it’s the commitment of JCSL to encourage the responsible exploration of areas that can only be enjoyed and accessed by these unique luxury 4×4 lifestyle companions.

The first day commenced with an early start-time of 6:30 am, where the adventurers and their families were treated to a buffet breakfast at the Silver Ray Restaurant in Pelmadulla. Each of the participants were briefed on the route and activities for the day before the convoy set off on their quest.

Each year the committee of the JCSL pays careful attention to the route that is taken. With an eye for selecting the most scenic surroundings, committee members plot the course beforehand, trying to select routes that are left undiscovered by the majority of travellers. This year was no different, with the convoy snaking towards Agrapathana, over the majestic Balangoda Mountain range and over the breath-taking Fordyce Gap. Day one Lunch was served at “Iona Villa” in Agrapathana where fellow Jeepers had an opportunity to relax and unwind.

Afterwards, the convoy made its way to the Grand Hotel in Nuwara Eliya, where JCSL members and their families had the chance to socialize and enjoy a lively evening with each other at a hosted BBQ night.

While day one had served as a warm-up with plenty of scenic paths travelled, day two promised to up the ante in terms of exploring the capabilities of each Jeep. However, before that, the committee members of the JCSL had plotted another scenic and relaxing drive for the first half of the day.

The route passed through Kandapola and Ragala, around the Piduruthalagala Mountain range, and down through the Randenigala and Rantambe dams along the historical path alongside Mahaweli River on Raja Mawatha to the final destination – Wasgamuwa.

Before nightfall set in, the owners and their Jeeps had an opportunity to flex their off-road abilities when climbing the ‘Lendiyangala Rock’ in Wasgamuwa. This challenging aspect of the course enabled the owners of each Jeep to fully appreciate the 4WD capabilities of their thoroughbred machines. One of the highlights of the expedition was that the owners were able to experience the off-road prowess afforded by Jeep’s 4WD tech, such as hill descent control, rock mode, 4WD low-range and locking differentials.

Day three of the expedition was spent entirely in the Wasgamuwa National Park. The national park, which is an important part of Sri Lanka’s thriving eco-system, is home to large herds of elephants, sloth bears, monkeys, and deer as well as several important species of birds. The park is also known for its role in history, as the battleground of the battle between King Dutugemunu and King Ellalan. The historical and cultural significance of the area was explained to participant members via walkie-talkies, as the convoy journeyed through the park. Thanks to the guided tour, it proved to be an entertaining and educational escape for both young and old.

Members were able to enjoy the diverse flora of the Wasgamuwa National Park, an area which is said to house one of the highest bio-diversities in Sri Lanka with over 150 different floral species. Thanks to the campsite that was booked by the JCSL committee, members were treated to a traditional Sri Lankan rice and curry buffet in the wilderness, arranged by “Lavendish Wild Safari” hotel. Members were also able to take a soothing river bath in the Mahaweli River, before exiting the park and proceeding to an evening of socialising and a BBQ at the hotel.

First time Jeep Club expedition participants Mr. Primal Wijayanayake and Mrs. Chandri Wijayanayake said “We’ve been able to try out nearly all the features of our Jeep Grand Cherokee on the route, and has sealed our love for the Jeep brand!”

This expedition, along with the five before it, served as a testament to the unique qualities exhibited by Jeep’s range of vehicles. Following the path and focusing on key locations mentioned in the battle of King Dutugemunu and King Ellalan, this year’s “Trail of Majesty” proved to be yet another delightful and educational adventure that, above all, was held responsibly and respectfully.

For over 76 years, ‘Jeep’- as the inventor of 4×4, has inspired man to dream and to dare; to go farther, live larger and explore every corner of this amazing world.