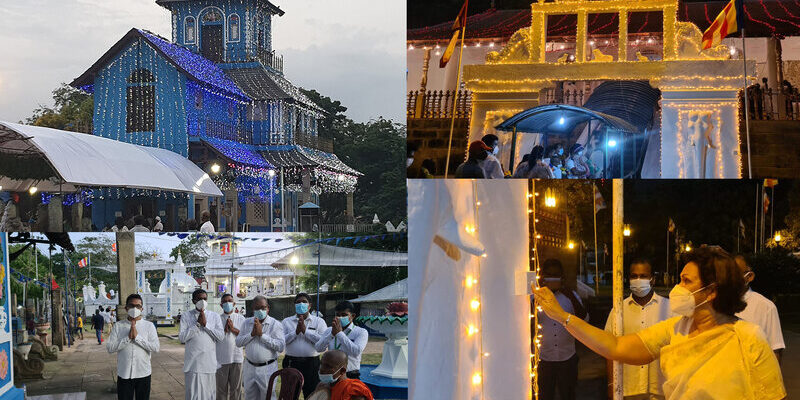 Ms. Amari Wijewardene, Chairperson of Swadeshi said that as a Sri Lankan owned company, we consider it a duty to safeguard the culture and traditional heritage of Sri Lanka by supporting activities such as this annual Aloka Poojawa.

She further observed that, Swadeshi illuminates places of worship in the country for the benefit of all worshippers and also to educate the younger generation on the importance of safeguarding the country’s heritage. The illumination is followed by a colourful cultural pageant which highlights Sri Lankan traditions and history.

The original Uthpalawarna Sri Vishnu Maha Devalaya, which was destroyed by the Portuguese was built by King Dhapulusen in 661 AD. According to Buddhist literature, the Buddha before he passed away had asked the God ‘Shakra’ to protect Buddhism in Sri Lanka. God ‘Shakra’ had entrusted this duty to the God ‘Uthpalawarna’- meaning “colour blue” resembling the colour of God ‘Vishnu’, hence the Devundara Devalaya is known as the Uthpalawarna Sri Vishnu Deva Mandiraya.

Situated in the Kegalle district, the “Aluthnuwara Sri Dadimunda Maha Devalaya” was built during the Dambadeniya period. It is believed that when King Parakramabahu II was passing through Aluthnuwara on his way to Sri Pada, he was very impressed with the place and decided to donate the property to the temple. Buildings were added on to the devalaya during the reign of King Panditha Parakramabahu IV. The place was known as Nawatilakapuraya and later it became Aluthnuwara. “Dedimunda Deiyo” is the guardian deity of the Buddha Sasana in Sri Lanka.

In 2013 the ‘Sri Dalada Maligawa’ of historic Dambadeni Raja Maha Viharaya, where the sacred tooth relic was kept and the ancient murals were renovated by Swadeshi Chairperson Ms. Amari Wijewardene to bring back its past glory.

Ms. Amari Wijewardene is the great granddaughter of Helena Wijewardene Lamatheni, who initiated renovations of the Kelaniya Raja Maha Viharaya in 1927.

The pioneer and market leader in the herbal personal care category in Sri Lanka, The Swadeshi Industrial Works PLC, was incorporated in 1941.  Among the pioneer brands of Swadeshi are Swadeshi Khomba Rani Sandalwood, Swadeshi Khomba Baby, Little Princess, Perlwite, Lak Bar, Safeplus, Lady, Black Eagle Perfume and Swadeshi Shower Gel range. All products manufactured by Swadeshi are 100% vegetarian and cruelty free, and have never been tested on animals. This stands testament to the company’s forward-thinking practices, as well as our desire to help consumers make ethical and eco-friendly choices. The company has always considered the health and environmental impact of its products, and continues to prioritize it. All Swadeshi products are registered under National Medicines Regulatory Authority (NMRA), of Health Ministry of Sri Lanka. All fragrances used in Swadeshi products are certified by globally accepted International Fragrance Association (IFRA) and produced under ISO 9001 – 2015 standards.