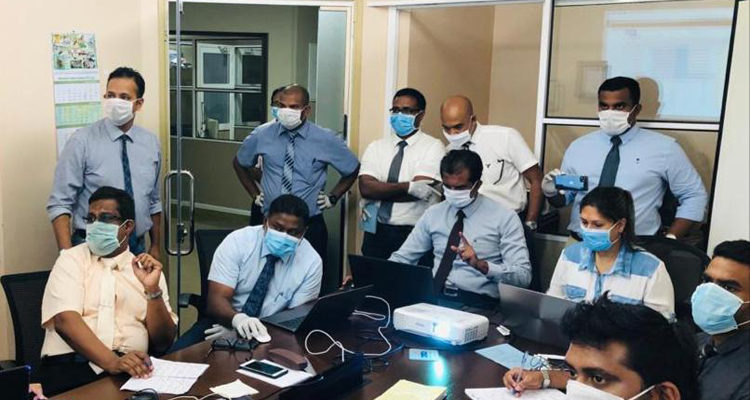 In the light of recent developments caused by the Covid-19 pandemic, following consensus among the stakeholders of the tea industry and with the support of the Chairmen of the Sri Lanka Tea Board, the Colombo Tea Traders’ Association successfully concluded the weekly tea auction on March 18th and 19th, at the Ceylon Chamber of Commerce, under challenging circumstances and stringent precautionary measures. However, it was realized that continuing to assemble such a large number of buyers at a single location would be too great a risk.

Since this situation was unlikely to resolve itself soon, various other alternatives were considered. Eventually it was determined that the most pragmatic solution was to conduct the auction, facilitated by a digital platform, over a period of four days, from April 4th to April 7th.

This is a historic event, as it is the first time in 126 years that the tea auction deviated from it conventional “out-cry” system, requiring the physical presence of the buyers, to move into the electronic age, with buyers recording their bids from remote locations, circumventing the need to expose themselves to any serious health hazards.

In the context of the Colombo Tea Auction, it is pertinent to make reference to the close association between the Ceylon Chamber of Commerce [CCC] and the Colombo Tea Traders’ Association [CTTA], engendered by its creation in its formal configuration, that commenced in 1894. In fact, it was the Chamber that inaugurated both these tea industry institutions in the same year, to facilitate the sale of tea in an orderly and efficient manner. Since then this relationship progressively strengthened, particularly on account of the fact that the auctions were held continuously within the office building of the Chamber.

Following the implementation of the Land Reform Act and the subsequent nationalization of all plantations, the Sri Lanka Tea Board [SLTB] was established in 1975, as the Regulatory Authority for the Tea Industry, under the SLTB Law No. 14 of 1975, and the Colombo Tea Auction was vested in the SLTB, as the State owned virtually the country’s entire tea production and, therefore, had the right to control its disposal.

However, the CCC and the CTTA were permitted to continue managing the tea auction, in view of their experience and expertise in doing so. This was formalized by Gazette Extraordinary No.320/15 of Friday, June 9, 1978, which legitimized the delegation of conducting the tea auction to the Ceylon Chamber of Commerce, in consultation with the Colombo Tea Traders’ Association, subject to the Bye-Laws and Conditions for the Sale of Tea by Public Auction prescribed by the CCC.

This arrangement by which the CTTA managed and conducted the Colombo Tea Auction under the auspices of the CCC, consequently, continued without a break. In as far as the Industry at large was concerned, the SLTB’s role was confined to that of a regulatory nature, apart from driving promotional initiatives.

The Ceylon Chamber of Commerce and the Colombo Tea Traders’ Association acknowledge with great pride the extraordinary feat achieved by the stakeholders of the industry, at such short notice, and extend our felicitation to all the members of the tea industry for their contribution, through their support and cooperation, to this ground-breaking initiative.